It’s hard to remember there being a time when the Fureys & Davey Arthur were not around but the great thing about the Irish folk band is they have never lost their common touch ‑ making their concerts feel like an intimate gathering of invited friends.

Fresh from their tour of Holland, Eddie Furey opened proceedings with Clare To Here a country sound accentuated by the picking of both Eddie and Davey Arthur.
Brother Finbar then took over with one of a handful of ballads which were inspired by lost family and friends with The Old Man which had a moving Harry Chapin Cat’s In the Cradle type lyrics which spoke of lost opportunities.
So things didn’t get too morose, they swiftly moved into a full on jig before Davey regaled the audience with one of his wild stories as a precursor to Eddie singing Her Father Didn't Like Me Anyway, a somehow northern sounding ditty similar to Dirty Ol Town which spoke of an unhappy love affair.
They had some fun with the audience too with a song inspired by Robbie Burns, Leezie Lindsay, where Eddie sang about love and romance before the band moved into The Mad Lady and Me, which comes from Cork, and which is one of those wonderful folk songs which manages to see the funny side of tragedy and inevitably throws in death, wild living and drinking.
Things were slowed down a little then with Steal Away a ballad which soon had Eddie passing over the singing of the chorus to the audience who took up the mantle enthusiastically.
Leaving London from their the latest album, Songs Through The Years, had more than a feel of Ralph McTell about it with a country undertone brought in by the voice of Finbar. The band then finished the first half of the set with Sweet Sixteen which remains their biggest hit to date, reaching inside the top 20 in the 1980s and of course the familiar words were soon picked up by the appreciative audience which left them wanting more for the second half.
They came back on stage to another favourite Leaving of Liverpool which started the fans where they left off – joining in with little prompting.
Finbar began a solo Leaving of Nancy but was soon underpinned by the harmonies of Eddie and the rest of the group for the chorus.
They dedicated The Lonesome Boatman to all the fishermen around the shores and began with a tin whistle intro and guitar imitating the rolling sea before Davey came in with his mandolin giving it a strangely spaghetti western style undertone. 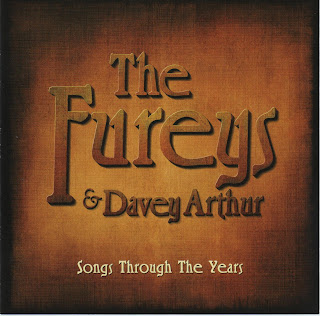 The tempo was kept upbeat with their version of the classic Goodnight Irene before moving into the nonsensical and fun country tune The Rooster Song about a virulent cockerel.
No Irish band can get away without singing songs about emigration and The Fureys were no exception with a solo from Finbar called Absent Friends which was followed by Davey singing I wonder before moving into Dublin 62 which is about people who met in the Fair City before leaving the Emerald Isle for good.
Paddy In Paris was another from their new album with Davey showing his picking skills on the banjo while the French flavour was added by some superb accordion playing.
Davey had another chance to show off his picking skills with a Tom Paxton number I Will Love You which complimented Finbar’s singing in a wonderfully melodic way.
The band finished the night with the Spanish-style Red Rose Cafe before moving into probably the second best known song of theirs, the anti-war ballad Green Fields of France, and finally ending on a high with Go Lassie Go.
Posted by Folkall at 22:21:00