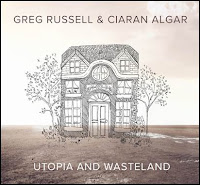 February 1 is St Bridget’s Day and considered the first day of the Celtic spring so it’s pretty appropriate that Josie Duncan & Pablo Lafuente’s debut album is released on this day.


Just like spring with its snowdrops and crocuses this album brings a touch brightness, lightness and colour to the short days of winter.

You have the mysterious and ethereal Celtic sounds of Scot Duncan and the warmth and verve of Spaniard Lafuente.

Last year’s Radio2 Young Folk award winners have brought their particular and considerable talents together in this album of mostly arrangements of traditional tunes. Opener The Night Visiting Song has been reproduced many times by some of the best in the folk realm and it’s generally a dark tale of illicit love, tragedy and ghostly goings-on.

Yet with Duncan and Lafuente’s version is a light, bouncing lilt which juxtaposes against the darker subject of the narrative. Lafuente’s lively strumming undergirds Duncan’s sweet and almost childlike voice.

This gives way to the more sober Thug Mi’n Oidhche, a traditional spinning song from her native soil. In the song the women from the Isle of Uist are lamenting their brothers fighting in a war far away. Duncan takes on a gentle and more melancholy tone accented beautifully by Lafuente with simple guitar chords and Conal McDonagh with his whistles.

The Great Escape is Duncan’s own composition and features fellow Lewis islander Colin McLeod who provides the mirrored vocals. Lafuente’s understated guitar is a perfect example of the less is more method. Duncan’s voice is mesmerising and draws you into the song like the sirens of legend.

Another traditional song favoured by many Celtic musicians, King Orfeo, is an epic narrative based on the story of Orpheus and Eurydice. Duncan and Lafuente set the tune at a fair old lick and there is some real life in them as the Celtic songstress punches out the lyrics.

For Uamh an Oir Duncan’s voice takes on a much more mature tone. There is a new depth to her singing as Lafuente highlights it with uncomplicated picking. Duncan brings a real magical and thoughtful sound to this traditional Gaelic song, which translates as Cave of Gold.

As in many folk songs, illicit sex rears its head in He Called for a Candle. This is a tale of a sailor doing what, according to legend, mariners do. The result is a pregnant woman clinging to the hope that the father of her illegitimate child will return and make a respectable woman of her.

Graham Rorie’s mandolin brings in the tune and, quite deceptively, leads you to think this is going to be a fairly light telling of scandalous love. However, the tone of Duncan’s voice says different, and the heavy sound of Charlie Stewart on double bass adds to the gravitas.

Duncan does real justice to He Fades Away, the poignant and telling song from Alistair Hulett about the decline of the mining industry.

The narration is told through the imagery of a slowly dying miner tended by his wife. Her mellow tones add a real sadness to the lament and Hedley Benson on the flugelhorn gives a poignant touch, almost mimicking the brass bands historically associated with mining.

The girlish tone returns as Duncan unfolds The Glow of the Kerosene Light which is dripping in nostalgia. Once again Lafuente is very much evident by his lack of intrusion. This is an open song where the listener can bolt on their own stories and memories of their grandparents.

At more than nine minutes long Potato Puirt is the longest track on the album and definitely the most unusual because it’s a collection of songs about the potato. The style puirt a beul which is mouth music associated with the Celts has travelled as far as Canada.

In this final track Duncan proves her skill with her singing gymnastics which are fascinating and infectious.

The words may often be unintelligible but the artistry and toe tapping rhythm gets into your metabolism. What it also has is a slightly perturbing silence of more than two minutes.

Duncan’s gentle voice returns with a haunting sound surrounded by ethereal effects and although she keeps the intricate word play of the previous section she also brings a style which is completely different. For a first album this showcases Duncan’s singing range beautifully and in among the enjoyment of her voice it could be easy to forget it’s a duo.

But Lafuente is there at his understated best where the thread of his guitar skill adds a colourful strand to what is a thoroughly enjoyable album.