The stage of the Wulfrun Hall, Wolverhampton could barely contain the 11 piece folkchestra that is Bellowhead and the hall itself was only just about capable of containing the rainbow of sounds this eclectic mix of musicians produce.

The set opened with the single tone of the marimba but quickly built up to a wall of sound that exploded into Black Beetle Pies from their latest album Broadside and even with little room to manoeuvre they still managed to get a thrash metal-style ending in.
There was a change of pace then for 10,000 Miles Away, again from the new album and which had more of a feeling of a sea shanty.
The theatricals came out as Jon Boden's distinctive voice and his fellow musicians created a sinister somehow 1960s spy theme type music with The Old Dun Cow, a song about lock ins that developed a Tim Burtonish darkness before moving into almost a jazz funk phase.
By now the band were in full flow and saxophone, fiddles, accordions, trombones and guitars seemed to be flying everywhere.
They brought out a more traditional folk sound with Parsons Farewell, the strings of Rachel McShane, Paul Sartin and Sam Sweeney given free rein.
The packed out hall really came to life with one of Bellowhead's best known anthems Whisky Is The Life of Man.
With the precision of a vintage fairground steam organ, but not the restrictions, the musicians moved and leapt around slinging their instruments to and fro with almost reckless abandon as they manically banged out the full battle hymn that is Byker Hill followed quickly by their version of Jolly Bold Robber which had a weird, nightmarish fairground tinge mixed with European gypsy sounds and eventually loosening into a polka.
The brass of Andy Mellon and Justin Thurgur gave a northern colliery band feel to Go My Way, a ballad wrapped up in a sea shanty. Then it was back to the manic playing they are famous for with Lillibulero which relied on a heavy fiddle sound 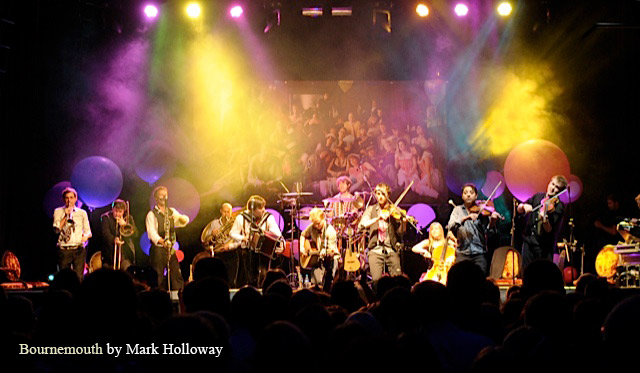 This was followed by another explosion of chords in the Dockside Rant based around the concertina of John Spiers and was another sea shanty.
What's the Life of a Man has a bizarre medieaval opening which moves into something reminscent of the theme to Beetlejuice then weirdly into a cabaret-style sounds before building to an impressive crescendo.
Little Sally Racket brought out a punk like sound mixed with a crazy jazz beat and the drunken morality tale unfolded with something akin to New Orleans jazz. The Morris dancing was brought out for Sloe Gin and then towards the end of the set they again pulled out one of their favourites -New York Girls.
Posted by Folkall at 10:37:00