The luxurious harmonies of the Staveley sisters blend so wondrously that it’s a bonus they play instruments so expertly, and if you want to hear how good they are then their debut album is the perfect introduction.

The Staves have put their time in and the trio’s eagerly awaited first album has already received acclaim with appearances on national radio and Later with Jools Holland. The tracks do capture wonderfully the precision singing and song writing of Emily, Jessica and Camilla. 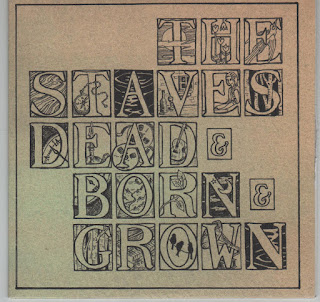 Their close harmonies are there right from the start with Wisely & Slow, and from the off you get the clarity and synchronicity of their mellow sound which picks up towards the end of the track.
It has and will continue to be their trademark that their superb voices on tracks such as Gone Tomorrow, The Motherlode and Winter Trees will always be what makes them stand out.
Eldest of the trio Emily Staveley-Taylor, says: "I think being sung to is the nicest thing in the world. There's nothing more comforting or enjoyable." When they sound as delightful as her and her siblings then there is no room for argument with this statement. Without wanting to take anything away from their remarkable talent, their excellent playing skills will only ever be the punctuation in the stories their songs unfold. The Staves have worked at creating images and feelings with their harmonising and it shows. In tracks such as The Motherlode, you can almost see them riding across the backdrop of Monument Valley, Arizona with the sunset ahead.
In complete contrast there is the wonderful yet almost lazy and poem-like Pay Us No Mind you can imagine the singer looking out of a window on a rainy day expressing their emotions for no other reason than for the daylight to take them away.
Their three part harmonies come through so playfully on Facing West, which has a reggae back beat feel providing the tempo for the doleful voices. This blends seamlessly into In The Long Run which is one of those tracks you put on after a hard day and feel it drain the stress out of you.
The title track uses a single guitar as the rhythm and is pretty much a capella which then moves into Winter Trees which although keeps the rhythm of the previous track starts of with a pseudo-sitar sound which then builds up slowly until the fuller sounds come in giving the sisters chance to vocalise their harmonies again.
Tongue Behind My Teeth, the single which is out now, has that American road trip feel to it you could almost hear it blasting out from an open top Cadillac as it travels down route 66.
One of their more familiar tracks, at least to their growing army of fans, is from one of their EPs Mexico which weaves their harmonies in and out of that single guitar providing the rhythm once again.
Snow has more playful harmonies and is a much lighter sound than most of the tracks on the album which then moves into the final track Eagle Song which is a ballad that has more of a country feel to it.
If you are not into folk music you should buy this album and if you are then you should buy two.
There is a chance to hear them live at the Hare & Hounds, Birmingham on November 28.
Dead & Born & Grown is on the Atlantic label and available now. Visit www.thestaves.com
Posted by Folkall at 20:05:00