There is no real arguing with the view Fairport Convention are folk royalty, their folk rock music was seminal, groundbreaking and the band's albums and line-ups have reached iconic status.

Through its many incarnations the band has included members such as the late, great Sandy Denny, Dave Swarbrick, who is about to embark on a new tour, and Richard Thompson who have gone on to become folk legends, revered and rightly so.
So it's dangerous ground to attempt to point out the emperor's new clothes but their concert in the Second City was one of two halves the first being pretty flat and lacklustre and the second less so.
Whether this is due to age, tour fatigue, over-familiarity with the material, apathy or a combination of all of these is difficult to say. The band members are no spring chickens and constantly touring must take its toll.
To be fair they are never going to recapture or revisit the heady days of the sixties and early seventies when everything was fresh; when you could be groundbreaking and the nation was far less jaded and far more ideological than the following generations, and it's not clear that they want to.
But the first half felt like they were going through the motions and they made the entire concert sound like a promotional tour for their annual festival because the repeated references to Oxford, Banbury and Cropredy became tedious and grating after a while.
Local lad, Dave Pegg, he is originally from Acocks Green, was about but absent from playing because of recovering from an operation on his hand, his place on bass was more than capably taken by his son Matt. When Peggy came on the stage in the second half things seemed to pick up slightly but unfortunately there was a whole air of flatness; of let's get this over with.
The other element Fairport desperately needs is a dedicated singer up front rather than members of the band taking turns. It's true they have being doing this format for some time but they do need a front voice.
As you would expect their playing was faultless because they have been doing tracks such as their opener Jewel In the Crown for decades. The material is so familiar you can bet they could play it backwards, sideways, upside down and even using their feet without a fault. And while you have to marvel at their longevity, their masterful use of their instruments which have almost become extensions of themselves it doesn't necessarily make for a good show. The line up of Simon Nicol, who is a founder member and main spokesman for the band, the aforementioned Pegg, Ric Sanders on fiddle who was the most animated of the band, Chris Leslie on mandolin and vocals who took over from Nicol occasionally and Gerry Conway on drums.
They do intend to go into the studio soon and even introduced a couple of new tracks among some of the favourites from their five decades of existence including a laboured version of Doctor of Physick.
Leslie introduced the song from their back catalogue and you got a sense that when he mentioned it he was expecting a round of appreciative applause which kind of fell flat and ending in a slightly awkward pause.
They treated the audience at the pretty much two thirds full Town hall to tracks such as I'm Already There, which somehow had a feel of Oasis about it, from their Over the Next Hill album. They pulled out a new one called Home which was a ballad sung by Nicol who doesn't have the most tuneful of voices and again it sounded fairly laboured and flat.
They threw in Theodore's Song and then showed some of their old form with Dirty Linen, the title of which is often changed as and when the mood takes the band. Leslie then took over with the Cell Song about John Babbacombe Lee whom the authorities tried to hang three times without success at Exeter jail. The band finished the first half of the set with one of their best known songs Mercy Bay and opened the second with another well known anthem Festival Bell which if you have never heard it has the feel of an old music hall/nursery rhyme type song and to give Leslie his due it's not the easiest of songs to keep momentum on, when you need to breath like industrial bellows. 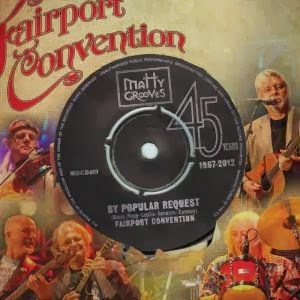 The presence of Peggy Snr on stage for much of the second half, albeit in the role of announcer, sometimes at great length, and backing singer, seemed to have a lifting affect both for the audience and the band.
They gave the audience the Wassailing Song, Farewell Farewell from what's considered to be their greatest album Liege and Lief and which is rarely sung during their live concerts; the more traditional A Happy Man another new one Myths and Heroes which had a sixties rock feel to it and Grace and Favour about Grace Darling's heroics during a storm at sea.
They then brought on stage the support act Edwina Hayes to sing a well-loved Sandy Denny composition Who Knows Where the Time Goes? which she should have been left to sing but instead was given really just a cameo role, but she made the most of it as Hayes does have a voice full of power and character.
Then, bizarrely, Sanders came from out of the shadows and did what was akin to a stand-up comedy monologue. Towards the end they went out with a lively version of Matty Groves.
Individually every song was played expertly as you would expect from a band to which picking up an instrument is as natural as breathing. But as a whole there was something missing, there was no spark no real enthusiasm in what was, ultimately, a fairly run of the mill show.

Fairport convention are playing Huntingdon Hall, Worcester on May 23, call 01905 611 427 and please note the May 24 gig at The Birchmeadow Centre in Broseley, Shropshire and the May 26 show at Lowdham Village Hall, Lowdham, Nottinghamshire are both sold out.
Posted by Folkall at 21:40:00