It has been a pretty amazing year for grand dame of folk June Tabor & Oysterband, both weighed down with their trophies from the 2012 Radio2 Folk Awards and their album Ragged Kingdom earning acclaim all over the place.

Oysterband were first on stage led by lead singer John Jones. They laid down the intro for June to quietly walk on stage before moving into Mississippi Summer accompanied by the fiddle and squeezebox.
They then slipped easily into anti-war song Fountains Flowing from their award-winning album. Strangely enough it has the melody of  the hymn To Be A Pilgrim but John and June's voices were lifted beautifully by the harmonies of the rest of the band.
The band then pulled out a cover version of the Velvet Underground's All Tomorrow's Parties which is among the top 10 covers of the VU as voted by the MTV generation and had long harmonising interludes from most of the band.
June then made one of her many exits for John to take over with the traditional Molly Bond which is a tale of injustice. The velvet clad singer was soon back on stage to sing a more upbeat If My Love Loves Me, a tangled tale of hidden feelings
Shane Mcgowan's Lullaby of London was next on the list, a good ol country sounding song which was given a Cajun twist by Ian Telfer on the fiddle.
One of the highlights of the set was the a Capella (When I Was No But) Sweet Sixteen with the magnificent harmonies of the deep men's voices blending sweetly with June's soft tones.
June did a disappearing act again and John took up an Irish traditional tune Blackwater Side which started off acoustic but was opened up by some great fiddle playing and then moved into a power ballad.
A throbbing drum beat brought in PJ Harvey's That Was My Veil and this was followed by another rock number, Turn My World Around.
Neither John or June look fully comfortable on stage but their stories behind the songs and their banter is entertaining and interesting enough to keep your attention without losing the pace of the concert.
June's velvety tones were perfect for the galloping beat of Bonny Bunch Of Roses.
Before moving into another cover version they gave the audience the ancient Danish folk song Son David which was jaunty, almost nursery rhymish.
The jury is still out, as far as I am concerned, on their cover of the great Joy Division's Love Will Tear Us Apart. The singers have slowed it right down.
The Bells Are Ringing brought in a heavier rock sound with almost a Burundi beat building to a crescendo.
June threw in another a Capella song, Lily of the Valley, which perfectly showcased her rich tones before moving into Bogie's Bonny Belle and the soul classic Dark End of the Street which worked with a simple squeezebox backing. 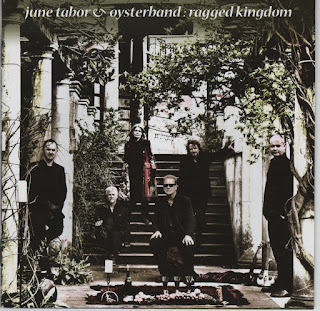 Other tracks they threw in included Bury Me Standing Up, a tale about European Gypsies, the traditional Dark Eyed Sailor, which gave Ian another chance to show off his fiddle skills, and towards the end another cover, this time from Dylan - Seven Curses, which opened up with a galloping beat.
Posted by Folkall at 21:40:00