When you have a pairing of Nordic and Scottish cultures and music the chances are you will get something off the wall, and the coming together of Scot Sarah-Jane Summers and Fin Juhani Silvola doesn't disappoint.

Widdershins is the duo's second album which brings together the fiddle of Summers and the guitar of Silvola in not so much a clash of cultures but more of a musical dance which makes everyone else on the floor stop and take notice.
Sydänyö opens the album which translates as midnight from the Finnish but the literal translation of the heart of the night is much more enjoyable.
The fiddle and the guitar waltz in the dark under a starlit sky in what is a hypnotic and sometimes chilling piece of music that is beautifully executed by the duo.
The title track has more of a jazz feel to it with the throaty sound of Summer's fiddle playing giving the instrument an incredible vocabulary as the guitar provides the rhythm, and there times where her playing descends into a wonderful madness.
This is followed by a triplet Brevig Reel/Ruairidh Barrach/Bellag the Drover. Showing again her skill and versatility, Summers opens with a hoe down style for the first of the reels where the notes fly off her strings like leaves caught in a swirling autumnal wind.
This gives way to a more traditional Celtic sound with Silvola's guitar providing the toe-tapping percussion part as the dancing fiddle playing takes you through the third part.
The longest track on the album. Vaajakosken Maija. begins with the gentle sound of the guitar and the hauntingly subtle sound of the fiddle.
This is a thoughtful and luxurious piece of music which slides over you like your favourite blanket, encasing you in the gorgeous warmth of the precise notes. With Sister Donna Kelly/Skype-Clype/Kittle Thairm the duo bring another triplet along.
Firstly Summer's playing comes dancing in like a Will O the Wisp, it's light, mesmerising and darts across the psyche, never staying still long enough to be caught.
The three tunes blend seamlessly while each time Summers giving the pieces their own distinctive voices. Silver Spring Reel has almost the feel of the Asian sitar as the clever playing of Silvola and the pizzicato of Summers fire the notes of with the rapidity of a machine gun but with much more precision and subtlety.
A' Cheapach na Fàsach brings a story of murders and tribal clashes and the duo manage to capture the sorrow,  menace and madness of the narrative. It has to be said the duo's virtuoso skills give their instruments incredibly versatile voices and images trip from the strings like a Pixar film.
Events lighten up with another dance tune. The Målselv Reel, penned by Summers, and, as you would expect is a bouncy tune which trips across the mind like a ballerina on stage. The tiny, almost clipped notes give it slightly a comical feel, like the player is having a private joke with the listener.
Silvola's Burning Sands is a brooding tune which carries undertones of the Delta blues, you could quite easily put a Howlin' Wolf stomp in there and it wouldn't be out of place. The subtlety of Silvola's playing is wonderful in how he makes the tune slide in and out like a surfer riding a wave. 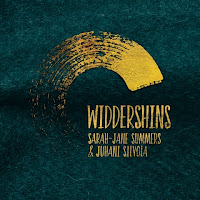 There is something really playful about Donald Morrison/Alexander Grant of Battangorm which makes it a shame that it's the shortest track on the album.
It has a dancing cadence which is obviously Celtic but at times has that head bob, strutting feel of tunes such as Pigeon on the Gate and Turkey in the Straw.
The album goes out with Spike on a Bike which is obviously Summers and Silvola having some fun while at the same time showing how even the mundanes of someone riding towards you on a bike can inspire a vivid piece of music.
The tune is more complex than the construction of the bike in question and once again showcases the duo's skill with their respective instruments. Widdershins is a good title for an album that does, for most of the time, go the "wrong" way but it is all the more fascinating for that. The way the duo give such eloquent and articulate voices to their respective instruments makes this album a real treat.