More Like A River Than A Road/A Perfect Landing


Scottish singer/songwriter Sheila K Cameron's musical talent is full of character, depth and appears to come from a deep understanding of the human condition. However, this said there is so much more to Cameron than can be contained by the label singer/songwriter.

Her songs are being reissued and when you hear her gentle tones on More Like A River Than A Road and A Perfect Landing you soon realise there is life and experience in every phrase word and syllable.
There is sometimes a weariness in her singing but never boredom, cynicism or negativity.
More Like A River... is a small collection of poems and songs opening with I Waited A Long Time which carries shades of the recently departed legend Leonard Cohen.
Cameron's style does have that laconic, almost world-weary style of letting carefully selected words sort of slip out of her mouth rather than be sung.
None of the tracks are epics, which is quite ironic considering the collection of songs covers several decades, but the opener is merely one and half minutes long. It has a very subtle blues feel underneath and, like so many of Cameron's tracks, they sound more like musings and thinking aloud rather than songs which was intended for others to hear.
This gives way to Let It Come which sounds like Cameron reading out loud a letter she is composing. Every word and note is thoughtfully connected to each other. Author Doris Lessing is clearly a heroine of Cameron's and Last Night I Dreamed About Doris Lessing tells of the singer's aspirations to live up to the ideals of her muse.
Somehow(Everything From My Suitcase Got Scattered On The Road) is atmospheric and somewhat lighter in tone than previous tracks. Cameron's works seem to invite interpretation from the listener and none more so than this track.
The House With The Windows is close to a spoken song with the words never quite rolling over into singing on top of the gentle piano accompaniment. Remembering Mr Toast is a poem given gentle accents of musical notes in the background.
Cameron paints a landscape with her words and it's from this she draws the title of the album. The final track, on what is essentially an extended EP, Where The Last Tide Runs, is once again Cameron bringing her view of nature in the listener's psyche. 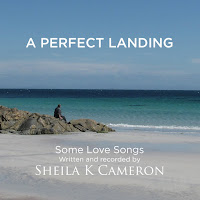 This album is the second in a series of reissues of Cameron's work and opens with the title track which is a poem which gradually constructs the scene of the title.
You Are Lovely does have a slight 60s feel to it along the lines of The Seekers' Georgy Girl and whoever the subject is they are clearly held in Cameron's affections.
This gives ways to With You In My Life which is a light track about the security of always having someone there for you. Not the most glamorous of titles You'll Like It At The Waterworks seems almost like a child's rhyme sung at bedtime.
Not showing an affection for urban living seems to be a metaphor in the country style song We Could Live In A Hut. My Love Is Velvet is a gentle love song where Cameron adopts a smokier sound to her prose.
Don't Hold The Hurt To Make It Easy comes across as a song of empathy and looking to pass on her wisdom about being true to yourself. Don't Sigh Even Slightly is another of those simple songs where you seem to catch Cameron thinking out loud.
Deeply cryptic, and even with the strong blues beat,  Rock Me Like A Child has an ethereal feel to it where even in the production Cameron seems to singing from another dimension almost like Aerial in The Tempest.
The Water Is Deep will be familiar to many listeners, often known as Carrickfergus, and is the only track on the album which isn't Cameron's own work but the simplicity with which she performs it gives it a whole new dimension.
Yesterday I Felt Two Inches Tall is a poem about vulnerability and Cameron's incredibly frugal use of words makes it extremely powerful. Another powerful song of longing and loss follows in Tell Me That now.
Corunna Street is a lighter sounding song which again is one her descriptive musings which seems to take a snapshot of life. The penultimate track on this fairly short album, considering it has 15 tracks, is I Am With You and is not quite fully spoken and not quite fully sung but again is a very descriptive offering about deep relationships. The album finishes with I Am Feeling Lost Bring Me Home where the organ accompaniment gives it an almost spiritual feel. 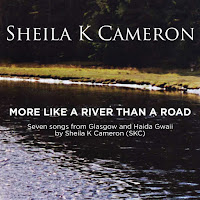 The song bookends a collection of songs which are wonderful in their simplicity, soothing in their gentleness and yet poignant with their accuracy on illuminating the human condition.
Cameron uses words like a miser uses money but what you get are songs and poems which are honed down to the bare bones and have the accuracy and sometimes the cutting edge of a samurai sword wielded in the hands of a true master.
If this reissue is designed to widen the enigmatic Cameron's appeal then there could be a new generation of listeners out there who have a treat in store.

More Like A River Than A Road and A Perfect Landing are available now on the Glalell label online, through Bandcamp and Reverbnation.