Life In A Paper Boat


One of the most enjoyable benefits of the folk music scene is the incredible talent and quality of the superb female singers it seems to give birth to, and one of those who is in the top level of having the voice of an angel is Kate Rusby.

With close to a quarter of a century of making incredible music, singing gorgeous songs, performing with virtually every name in the folk world and at every folk festival worth shaking a stick at; creating her own label and setting up her own folk festival you kind of wonder what's left for the Barnsley songbird.
Well Life In A Paper Boat goes some way to answering that question. Rusby meets the technological age and brings the world of electronic gadgetry into her repertoire where, it has to be said the transition has been generally a good one. However, at the heart of all the tracks, on this her 14th studio album, is the unmistakable soft and slightly tremulous sound of her voice which is as instantly recognisable as a beacon burning on a Yorkshire hilltop.
The move seems to be carrying on from her husband Damien O'Kane's venture on his last album where he blended traditional sounds and music with modern electronic gadgetry and techniques with mixed success. It's O'Kane who has produced the album, as well as playing on it, as part of the cottage industry which is the Rusby music business.
The album kicks off with an arrangement from the couple in Benjamin Bowmaneer, a quirky tale of a tailor who is drawn into the Hundred Years War. As it should be, Rusby's voice is at the centre of the song with an impressive collection of sounds around her, some of which come across as slightly intrusive. Following on is a much gentler original Rusby track in a style which is almost her trademark. Hunter Moon is her fanciful look at the universe with a tale of unrequited love between the sun and the moon, which are destined never to meet. Her emotive singing style is spot on for this lovely piece of storytelling.
The Ardent Shepherdess is a traditional track on which Rusby puts her dabs. It is a beauty of a song where every piece of the track fits perfectly not least of which is the understated banjo backing of Ron Block. The title track is another Rusby original and, like Ange Hardy's By The Tides, is another song inspired by the awful plight of refugees fleeing to safety. The way she has arranged it is close to a hymn. Rusby's voice is again allowed to take centre stage but not in an overpowering way.
The backing musicians, with Nick Cooke adding a really thoughtful accordion insert, keep their distance adding to the whole without intruding and the electric guitar of Steve Iveson adds a Dire Straits-style dimension to it.
With Only Desire What You Have the tune seems to take precedence. Obviously Rusby's voice is still there but it doesn't sound as comfortable as the previous tracks and the jury is out on pairing her singing with the harmonies of Dan Tyminski. It's almost as if they are trying too hard to smooth over the join between their individual styles. Next Rusby adds the tune to the traditional Hundred Hearts, a soft and slow moving song which is thoughtfully executed and where her singing seems subdued and yet full of emotion, it is carried along gently by her band of musicians. There is a brooding quality to Rusby's voice as she sings the tale of The Mermaid. Here Tyminski's harmonies are far more cohesive and the fairly complex layers of sounds which make up the tune are wonderfully blended to create real atmosphere.
It wouldn't be a bona fide Rusby album unless there was some reference to the life and culture of her beloved Yorkshire. Traditional offering the Pace Egging Song gets the Rusby treatment where she tells the tale of the local dramas involving St George which are performed every Easter. O'Kane's handling of his wife's cover of the Archie Fisher song, The Witch of Westmorland, creates just the right and ethereal atmosphere for Rusby to tell the tale of the rescue of a knight. The intro to 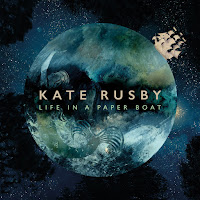 I'll Be Wise feels a little tagged on and unnecessary to what sounds like Rusby's version of a torch song. Apart from that it's a sound tune with the strings from Donald Grant, Magnus Johnston, Triona Milne and Laura Anstee helping it to punch above its weight.
So distinctive is Rusby's voice that it's not often you are able to make comparisons but the style and atmosphere of Night Lament gives her a wonderfully rich sound similar to Enya.
Rusby has again done a great job in adapting this traditional song which is given even more depth and character by the previously mentioned strings section. The album goes out with a bit of fun in a bonus track of Big Brave Bill a Yorkshire superhero who Rusby invented for her children's bedtime stories. It's vintage Rusby and as Yorkshire as rolling dales, sheep dotted on the landscape, flat caps and the tea which is the lifeblood of both characters.
Rusby may have been delighting fans with her mesmerising tones for nearly 25 years but this album shows she is still willing to walk new paths and bring in new elements to her singing and songwriting. Fortunately she hasn't gone overboard and allowed the new sounds and gadgetry to become too obvious because at the heart of what makes Kate Rusby such a favourite is her incredible singing; a love and respect of traditional songs and music, along with her infectiously affable character.