If you are going to have an opening track on a debut album then usually you go for something catchy; a tune which pulls the ear of the listener in or something that is going to get their feet tapping straight away.

Or you can just ignore this and go with a tune from Shetland which has been gleaned from a fragment of old Norse.
Fair play to Long Lankin, they set their stall out with a big sign saying here's something a little out of the ordinary. With their arrangement of the Unst Boat Song, Tanya Jackson, Marion Gray, Caroline Regan and Polly Hunt put their harmonising and stripped down musical arrangement on show, and straight away you realise you are listening to something with a history and with depth.
In this track, they have a similar style to The Unthanks where their interpretation is more important than any musical convention.
Jackson's Poacher is her new take on the Sleeping Beauty tale and unlike the previous track is does have the flowing undulation of a ballad. She sings alongside her fellow musicians on top of the harmonies and simple percussion notated by the gentle stroke of Gray on the fiddle.
There is no two ways about it, Long Lankin know their instruments and often have a more-is-less approach to using them, but they are all about the voices, and why wouldn't they play to their strengths. Bonnie Ship the Diamond is a whaling song and, but for the occasional interjection of Regan on the whistle to add colour, the song is pretty much A Capella which is a great way for them to show off the strength of harmonies they can carry. They go on to branch out into the traditional sound of Sweden with two tunes. The combination of concertina, fiddle, guitar and guest Stephen Street on double bass give the first part an almost Cajun feel, the second part sets a quicker pace with the accordion coming to the fore. It's hardly surprising the quartet spread their musical net far and wide as Scotland, Ireland and England along with Bulgaria are represented in their respective backgrounds.
Royl Field Hill from Gray has the feel of a poem set to music. The simple backbeat of second guest Ray Moody catches the cadence of the slow and precise narrative which is inspired by her childhood. It does have the experimental feel to it similar to some of the early works of Fairport Convention. They go for the full A Capella with their arrangement of the traditional north East ballad, Here's the Tender Coming. The four part harmonies get the balance right between blending the voices as a whole without losing each separate identity or encroaching on the sound of their fellow singers. It works really well with the differences in pitch set spot on. They leave the singing behind for the next track taking on two Irish reels, Devanny's Goat and Maud Miller. Regan's concertina gives it an understated opening and paves the way for Gray's fiddle before the other band members fill out the spaces for what are two real toe tappers.
Their arrangement of Robert Burns' Now Westlin Winds has a gentle opening with Jackson on Guitar. Gray's singing has a doleful quality which adds to her storytelling style on this track that is then lifted by the harmonies of her fellow band members.
Regan gets to let her voice off the leash for County Down, a strong but mellow ballad from Tommy Sands, which gives another chance to hear how well the four women harmonise and get that balance between voices and instruments just right, there is even the gentle growl of Street's strings in the background.
The accordion and fiddle seamlessly bring in another instrumental in Arthur's Tunes from Jackson, which are two light and extremely pleasant compositions written for her son. Without doubt the most intriguing and theatrical track on the album is Sailboat Malarkey which is their version of a sea shanty, however the opening pizzicato, along with the muted voices and instruments, add a real ethereal and eerie feel to a tale of a mystery ship. 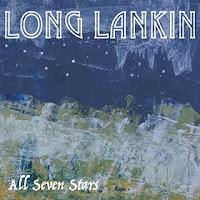 They take the album out with a traditional bang in the shape of Bonnie Lass O' Fyvie O which is an old story of a love affair which doesn't have a happy ending. The song has the strength and speed of something from The Pogues or Bellowhead but not quite the energy, even so it's as good a way to end an album as any.
If Long Lankin set out to put their musical and vocal CV down on an album then they have succeeded admirably. This debut is a fascinating and eclectic collection of songs and tunes which show the listener how diverse the bands' talents and how wide ranging their interests in music are.
All Seven Stars is available now through the band's website and via iTunes or Amazon.

You can catch the band live July 7 at Orpington Folk Club, which is held at the Change of Horses, Farnborough High Street, Nr Orpington,  Kent