First of all I would like to apologise to everyone for the gap in posts and delay in writing reviews. I have been in the convoluted process not just of moving house but moving country. I am now working from Williamstown, Galway, Eire. Over the last few months I have been dealing with solicitors, moving firms, estate agents and banks on both side of the Irish sea, some of which moved more quickly than others. On top of this I have been living out of boxes and trying to keep two cats, stressed out by house hopping between very kind and understanding family members and long journeys in their carriers, from going stir crazy.
However, now I am fortunate enough to be looking out over green Irish fields in a blissfully peaceful area as I write this. So thank you to all of Folkall's followers, readers and visitors for your patience and loyalty. I will of course be keeping the reviews and news going from now on but will be expanding my coverage beyond the West Midlands for obvious reasons.
I hope you enjoy my blog in the coming weeks and months and will continue to read, enjoy my efforts and spread the word.
Also keep your messages and comments coming. I can be reached on danny@dfarragher.wanadoo.co.uk, danfare60@gmail.com or dannyfarragher@hotmail.co.uk. I am also on facebook and Folkall has it's own facebook page and you can contact me on twitter @dannyfarragher.


Of Maidens and Mariners

You could be forgiven for thinking Said The Maiden had enlisted the talents of Seth Lakemen for their opener on their new EP.

It has that gutsy, definite sound, however it's Hannah Elizabeth rasping the bow across the fiddle, carrying the lyrics all through the tune. But then Jess Distill, Elizabeth and Kathy Pilkington have always been able to produce a sound which belies the Hertfordshire trio.
Their arrangement of The Soldier and the Maid is strong, solidly traditional and has a tune which surrounds their harmonising voices like a castle tower. They come up with an interesting choice for their a Capella track. They do have wonderfully strong but gentle voices and their harmonies weave together as intricately as a Persian rug in their version of Dolly Parton's Jolene. It does take some getting used to because the song is so familiar and needs several hearings to bed in properly, but they fortunately have the skills to carry it off.
They keep the harmonies going for a live version of Spring Tide Rising recorded at Redbourn Folk Club, not quite a Capella their voices take centre stage and are highlighted by the understated music and the simple but highly effective song is given a little more colour by the inclusion of the audience providing the refrain.
Also recorded at Redbourn, the final track Polly Can You Swim? is a lively sea shanty which the trio imbibe with really energy with just their voices only adding the percussive highlight on the chorus. Their style on this track gives it authenticity and you can almost see them on the deck of a galleon entertaining the crew, the role of which is again provided by the audience.
The EP is the follow up their A Curious Tale which was a fine album and this shorter offering keeps the standard up and some.

Of Maids and Mariners is available now through the band's website.

There is a rawness and under-produced quality to Iona Lane's new EP which actually, with seven tracks and nearly an half hour of music, sits somewhere between the format and a full blown LP. 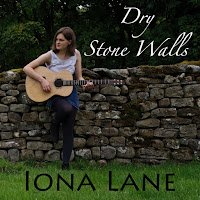 Lane's voice is wonderfully restful and peaceful, and while it doesn't hold the strength and clarity of someone such as Fay Hield it does have the sweetness of some of her peers such as Kate Rusby and Ange Hardy.
On some tracks there is even a depth and emotion you associate with the much lamented Sandy Denny.
Opening with Brown Eyes, one of six tracks written by Lane, she does have a childlike quality to her singing which is not entirely surprising when you consider the multi-instrumentalist from Lancashire is only 17 and was studying for her A Levels while making the record.
It's a simple ballad played very well and perhaps not the best opener as it does lack a certain oomph and what sounds like slightly laboured flute instrumentals from Bess Shooter doesn't help.
Plane to Spain gives a better feeling of how smooth Lane's voice is and you start to get more emotion in her vocals which do bring to mind the early offerings of Sinead O'Connor. There are times during the song where lane is almost speaking the words rather than singing them which adds to the depth of the ballad.
The track which follows, Seasons, is one of the best on the EP and certainly has the feel of Denny's ethereal tones. Her singing is rather interrupted by Shooter on the sax which doesn't quite sit right in the grammar of the song as a whole.
The title track sees Lane using that mixture of almost speaking lines between the definite singing and, whether by accident or design, she uses it very effectively to give the ballad some variety and atmosphere.
There is a slightly more country feel to Orkney and she sounds as though she is mirroring the movement of the wild seas around the islands with her voice dropping and picking up pitch. There is further added interest from the faster underbeat of Joel Shooter on the drums and the precise inclusion of Lane's slide guitar skills.
Si Bheag Si Mhor is a traditional instrumental which does have the feel of an exam recital rather than a free-flowing tune. It does sound laboured and over cautious in its execution.
The final track Here We Go Again is almost a sister ballad to the opener although this track is more intricate and has a more free-flowing feel to it as well as Lane's voice sounding more confident.
Lane has a really enjoyable voice and an easy style of performing which is always worth listening to. It will be immensely interesting to watch and to hear how she will develop. There is a great deal of talent there and you get a sense that where she is now is the start of something that a lot of people are going to take notice of in the future.

Dry Stone Walls is available now from the artist's website.


You have to give it to Root & Branch when it comes to opening tracks then the title tune of their EP is simple superb. It's the sort of tune that if it were the wake tune on your alarm clock you would leap out of bed and start dancing.

As fishers of music the intrepid band of Nathan Bontrager, Stuart Graham, Ewan McDonald and Jess Whelligan they cast their net far and wide covering the traditions of the UK and across the pond to the US.
Overground is a trilogy of The Ladybird, The Stone Frigate and The Overground Reel and kind of sneaks up on you before blowing the cobwebs out with Bontrager sawing at the fiddle and kept bouncing along by Jones on the banjo who throws in triplets like they are going out of fashion. The middle set morphing into a hoe down-style reel and would get a wooden leg tapping along.
This is followed by the much more sober Poor Old Soldier (The Rogue's March) where the strong vocals remind very much of the great Dick Gaughan. The words are complemented perfectly by the rest of the band especially Bontrager and his mountain sounding fiddle playing with the mandolin adding some strong highlights to the tune.
They stay with the bluegrass sound for The Road to KRK/Reuben's Train the first part of which is an intricate mixture of sounds made to appear simple by the bands obvious skill and chemistry. They crank up the energy for the second part and what comes across really strongly is the enthusiasm for the music they play.
Reuben's Train is a real footstomper and one every listener should indulge in.
The penultimate track of the five is Back of the Change House which although still strong with the fiddle and bouzouki has a real doleful and thoughtful sound to it which is full of emotion. This eventually gives way to some wonderful and lively mandolin and layer after layer is brought in almost like the players had restrained themselves enough for the second part, The Plagiarist.
The EP goes out with The Blackest Crow a gentle and thoughtful ballad which is given a real depth and almost a melancholia through the gentle thrumming of the cello and a real haunting quality from Whelligan's voice.
If an EP is an appetizer for an album then this one should have you slavering with anticipation like a a starving mutt outside a butcher's window.