Right from the first note this album from Kyrre Slind produces such evocative gentle music that it's almost like listening to something spiritual. Initially it would be easy to mistake Slind's playing for the expert fingers of someone such as Martin Simpson, he has that same relaxed but masterful style.

At more than eight minutes Oysterhaven is a serene introduction to the Norwegian's musical diary of his travels through Norway, Ireland and Scotland.
This really is a beautiful guitar piece which shows you just how subtle the instrument can be.
Coming soft on its heels is Remembering, where Slind gives his strings something close the sound of a harp. There is definitely an ethereal quality both about his playing and composing. This is musical massage, it's incredibly therapeutic so much they should even consider selling it in pharmacies as a tension buster.
Gaupskaret has more of a middle eastern/Turkish sound to it with Slind using some very primeval singing to accent what is an incredible composition.
Leksa has the sound of the past in its notes sound like it has arrived from a Europe of medieval times with a sound which Ian Pittaway also expertly reproduces as part of The Night Watch.
Sandra's Melody seems to incorporate the styles Slind has already put on show with a very folky rhythm but still that eastern twang to it and he even throws in what could tribal throat singing. This is followed by Tunnsjo which is onomatopoeic as Slind uses the guitar to recreate and be inspired by nature. You get the feel of the wind creating ripples across a mountain lake; of the warmth of the sun and of the rainstorm. It really is an inspired and clever piece of music making. Braien's Melody brings with it precise picking where every note is released with laser deftness in a gorgeous flow to make a lilting whole. 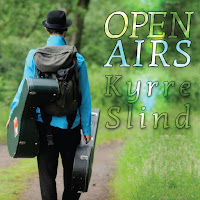 Another melody, this time Kevin's follows this and again there is that precise picking which, in this case sounds so familiar and yet so new.
The tune changes almost imperceptibly gentle segueing into borders where the strumming becomes more thoughtful and restful, moving in and out like a tide. And like the sea, the tune is slightly unpredictable and changes according to the ebb and flow of the water. Towards the end, the style of play is akin to the sitar giving it the sound of a raga. The final track is in complete contrast.
Under Water does convey a world which is hampered by the viscosity of the medium, the slow pace touches slightly on the melancholy and does have a feel of the middle section of a Pink Floyd piece.
Slind is undoubtedly an expert when it comes to massaging the strings and does have a remarkable ability to spark emotions and create images with his sound.
What you get with this album is not only some unique and inspiring compositions from Slind but his experience of travelling into Ireland and Scotland mapped out for you in his musical notation and, while they were borne personally from his travels, he has left them open enough for the listener to interpret and find their own forms and visions.