COMING YOUR WAY AND NEWS 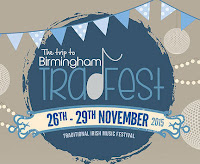 The newest festival in the second city is the Birmingham Tradfest which will be four days of traditional Irish music running from November 26 to 29.
The festival is centred around the Irish quarter of the city in Digbeth and will be using several sites which are, The Irish Centre, The Crossing, Molloy's Ceol Castle, The Old Crown, St Anne's Hall, The Spotted Dog, Cleary's, The Bull's Head and the White Swan. The impressive lists of artists who are booked to play include Mike McGoldrick, Dezi Donnelly, Jim Murray and John Joe Kelly, Mary Bergin, The Damien O'Kane Band, May Monday, the Mairtin O'Connor Trio, Karen Tweed & Adrian Burns, Sean Kane and the McEvoys. There will also be album launches from The London Lasses with Chris O'Malley, Patsy Moloney and Karen Tweed & Adrian Burns.
The festival will include a host of workshops and the first The Molloy Award will also be handed out. The award seeks to find and reward the best young talent within Irish traditional music and is named after Anne and Pat Molloy who were great teachers of Irish music.
The finalists are: Athrú, Élan, Mearganta, Obtuse and Out The Gap. the award will be presented on November 28 in The Munster Suite of the Irish Centre, doors open 3pm.
Weekend tickets and individual day and concerts tickets can be bought through the website.

Sadly Folk21. a movement which has been gathering at pace over the last few years, was hoping to hold its first National Conference in Birmingham this month however, the event has been postponed, the statement on the organisation's website reads: "The Folk21 committee are disappointed to announce the postponement of their National Conference, which had been scheduled to take place in Birmingham on the 21st November.
"The reason for this decision was partly an inability to attract the hoped-for external funding, together with a disappointing response in ticket sales with a month to go.
"Action is under way to refund all the tickets sold to date, and the committee would like to express their sincere gratitude to everyone who had booked, and to thank them for their willingness to take part, stand up and be counted.
"A review is now under way of future activity and further announcements will be made in due course."

Everyone who had bought tickets has had their money refunded.

Another act from Shropshire will be providing the music on Monday 23 in the form of Grey Wolf with special guest Deborah Rose.
Returning to the garden, Grey Wolf are a trio made up of Jim Allen, banjo, Martin Thomas, vocals and mandolin and Ben Walsh on fiddle.
Deborah Rose has supported Jimmy Webb, Ralph McTell, Judy Collins and Fairport Convention in concert, and performed on Terry Wogan's Radio 2 for the 50th anniversary of late singer Eva Cassidy. Usual times apply and tickets are £10.
Coming from a more classical background Threaded will be playing on Sunday 29 as part of their debut album tour. The trio will be supported by Josh Wunderlich. Usual times apply and tickets are £7 or £5 with concessions and are available from the Cafe or www.wegottickets.com

Also in King's Heath, the Red Lion Folk Club has its own impressive line up of acts starting on November 4 with Alan Reid & Rob van Santen.
The duo will be supported by Louisa Davies-Foley & Jason Sparkes tickets are £11 for members and £1 more for non-members which applies to shows. Doors open at 7.15pm for a 7.45pm start. The following week on Wednesday 11 the venue welcomes folk stalwart and north east raconteur Vin Garbutt who will be supported by Floot Street. Due to refurbishment at the Red Lion this show will be staged at an alternative venue The Loyal Caledonian Corks (upstairs Function Room), 225 Alcester Road South, Kings Heath, Birmingham B14 6DT. Tickets are £12 and times are as above.
The next meeting on Wednesday 18 welcomes Fil Campbell & Tom McFarland. The husband and wife duo come from Down in Northern Ireland. Usual times apply and tickets are £11 for members. Taking the month out Wednesday 25 Ray Cooper & Rowan Godel. Ray has been a long time member of Oysterband and the act will be supported by Chris Cleverley. Usual times apply and tickets are £11 for members.

There is a lot more going on in Brum for fans of folk music to enjoy on November 19 folk/rock legends Steeleye Span are at the Town Hall featuring Maddy Prior. The show starts at 7.30pm and tickets are £19.50 or £22.50 plus transaction fee which can be avoided if you buy the tickets from either the venue or the Symphony Hall.

Legendary rabble rousers The Wolfe Tones will be stirring things up at Scanlon's Club, Acock's Green on November 13

The Staves will be bringing their beautiful harmonies to The Institute on November 1. Sisters Emily, Jessica and Camilla are touring with their latest album If I Was. Show starts 7pm and tickets are £16 in advance with a £2.50 service charge. The trio will be supported by Gabriel Rios.


Moving into the Black Country the Newhampton Arts Centre(NAC) in Wolverhampton will be welcoming Welsh band Calan on November 21. The five young musicians Angharad Sian, Bethan Williams-Jones, Patrick Rimes, Sam Humphreys and Alexander Moller are making quite an impact and were recently in session on the Radio2 Folk Show. The show starts at 7.30pm and tickets are £12.50.
The centre in Dunkley Street, Whitmore Reans is also offering a pre-show Welsh supper at the on site Jesters Cafe for £5. There will be a Choice of: Traditional Welsh Cawl (casserole with lamb and beer) and crusty bread; luxury Welsh rarebit topped with a poached egg and served with leeks in white wine sauce and accompanied with sparkling or still Welsh water. Book online or order at least 24 hours in advance because the casserole needs slow cooking.

The Woodman Folk Club, Kingswinford is playing host to Anthony John Clark & Friends on November 13. Featuring Dave Pegg of Fairport Convention he will be launching his new album. The show starts around 8.30pm and tickets are £8 for members and £9 for non-members.
The following week, Friday 20,  the canalside club welcomes Ruth & Ken Powell the duo who make up two thirds of Risky Business will be bringing the eclectic mix of music and vocals to the venue. Times are as above and entry is £6 for members and £7 for non-members.
On November 27 all the way from the USA Brooks Williams will be showing his mastery of the guitar at the club . Show times as usual and entry is £7 for members and £8 for non-members.


Another legend from the North East is coming south to the Common Folk, which meets at Pelsall Cricket & Sports Club, on November 12. Jez Lowe will be playing the venue with the show starting at 8.30pm. Not tickets prices have been posted as yet. Lowe will be supported by Lynn Jenkins and Andy Rush.

The aforementioned Henry Girls will be bringing their sound to The Gatehouse Stafford on Wednesday November 4. The show starts at 8pm and tickets are £10, £8 with concessions and there is a 50p for each ticket. Highly respected singer/songwriter Martyn Joseph is coming to the venue on Monday 9 with the show time as above and tickets are £15 or £12.50 concession for the unemployed, no other discounts and the 50p booking fee.

Moving counties Theatre Severn in Shrewsbury welcomes folk rock pioneers Steeleye Span with Maddy Prior. The show starts 8pm and tickets are £24.50
Marking their 10th anniversary Skerryvore return to the Shropshire venue on Friday 20. Formed on the tiny lsle of Tiree off Scotland's west coast in 2005. Brothers Daniel and Martin Gillespie met fellow musicians Fraser West and Alec Dalglish and bonded over a shared love of music. Show time is as above and tickets are £17.50 with a 10% discount for friends of the theatre.

Staying in the town Peter Knight's Gigspanner will be playing The Hive on November 18. The show starts at 7.30pm and tickets are £14.

The now disbanded Bellowhead will be going out in style and saying 'That's All Folks' on November 25 at Civic Hall, Wolverhampton. Doors open 7pm and tickets are £26.95 or £21.45 and subject to a 10% booking fee plus any postal fees.

The 50th Anniversary tour show of Ralph McTell at the Artrix Bromsgrove is sold out.

Birmingham outfit The Old Dance School has changed its name to The Fair Rain.
The band Robin Beatty, Helen Lancaster, Samantha Norman, Jim Molyneux, Aaron Diaz, Laura Carter and Adam Jarvis have decided it was time for a change. The band's statement on a recent circular read: "We’ve known for some time that we needed to make a decision in order to move forward.
"The new album that we’ve been industriously working on for the last 12 months feels like a real gear shift in the way we sound, so we know this is the right moment.
"We’re really grateful for the support of all our followers over the years, and we realise that this is a big leap of faith – will you come with us?" 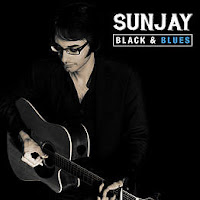 Black Country bluesman Sunjay Brayne has a new album, Black & Blues, which is now available for pre-order.
The album from the Stourbridge musician is due out on November 30. Brayne has been back in the New Mountain Music Studios with producer Eddy Morton.
The album was recorded in one day in August and is a collection of 10 traditional blues song arrangements. Click here to pre-order your signed copy now!
Also releasing albums this month are Damien O'Kane with his solo offering Areas of High Traffic which is due for release on November 9. Mairearad and Anna release their album of traditional music Best Day on November 16. The Sam Kelly Trio will be releasing their new album, The Lost Boys on November 19