It's difficult to imagine the world of folk and acoustic music without Martin Simpson but it could easily have come to pass were it not for the fact as a youngster he got his hands on a banjo instead of a pair of tights.

“When I was a little kid my first ambition was to be a ballet dancer, then I wanted to be an entomologist or a bug hunter of some sort, but I got my hands on a banjo and it was all downhill from there,” says Simpson dryly.
Thankfully for the world of music in general and folk music particularly, the banjo caught his imagination.
That's not to say Simpson wouldn’t have made a good ballet dancer, but he has given the music world so much in his role as a “disseminator of traditional music" as he describes himself.
It would have been a great loss to the folk fraternity, when you consider the list of musicians, bands and projects with which he has been involved over the last 35 years or so.
“I have worked very hard for a very long time and got to the point where people recognise that and so I get offered a lot of different projects and gigs and it’s a privilege to do that work."
He does have a confidence borne of years of playing all over the world, striving to improve his playing and singing but there is no hint of arrogance or self-importance even though Simpson’s reputation and skill as a musician does carry a lot of weight among his fellow practitioners.
“I realise that, and I am very proud of it. I take it very seriously in one sense in that I really love what I do, that’s why I did it in the first place, because I love the music. It’s a total privilege to do what I do. But don’t get me wrong it’s bloody hard work in lots of ways but it’s great.”
Simpson, who will be 62 later this year, is originally from Scunthorpe, Lincolnshire but now lives in the Steel City, Sheffield. He has just finished his latest project as part of a trio, putting together a new album, with a working title of Murmurs, which is due out the first week in June through Topic Records.
"I tend to put a record out every two years and have just finished recording the latest album with Andy Cutting and Nancy Kerr. We recorded the entire record, which is 18 tracks - far too much, over three days.
"There is a lot of banjo on it. There are traditional songs, songs which Nancy has written, songs I have written and tunes Andy has written. It’s quite diverse. There is a jug band song on there and a Lyle Waterson song.
"I am very proud of playing with Andy and Nancy; they are brilliant at what they do."
Cutting is considered a master of his instrument the melodeon while Kerr is a highly-respected singer and multi-instrumentalist whose speciality is the fiddle. 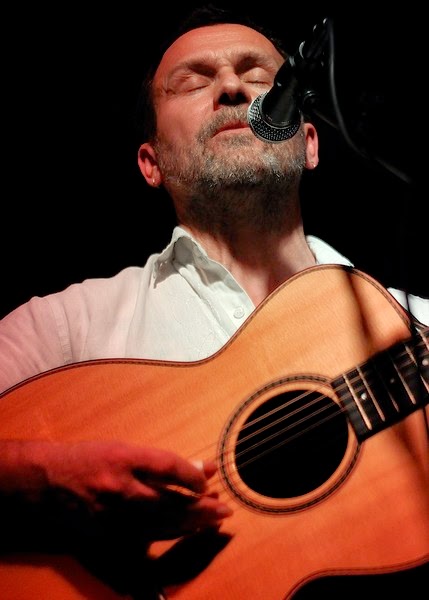 So how did he come to be working with them on the new album?
"Years ago my agent at the time, Chris Wade, had this idea that slightly older musicians should work with younger ones. She said, 'would you like to do that?' and I said sure.
"So then she said, 'who would you like to work with?' I said I would have to think about it. I came home and asked my wife Kit who should I work with, she said, 'Andy Cutting, he is fantastic'."
"He is the king of his instrument, and he transcends it," says Simpson with genuine admiration in his voice. "It gets to the point where it doesn’t matter what he plays he just makes incredible music.
"We have worked together since about 2007.
"I had worked with Nancy on various things, she played on Kind Letters(Simpson's 2005 album) and again it was Kit’s idea, she said, 'you and Andy should get together with Nancy as a trio.' And of course the moment she said it, I thought yes.
"We started last year and did our first gig at Sidmouth Folk Festival in August and then did a tour in September which was really successful.
"It was great because it wasn’t like making the record and then going out on tour, we rehearsed, did a bunch of gigs and then made the record. Which I think is a good way round to do it.
"Then in June and September we are going out again to really promote the record. By which time we will have a waggon load more music no doubt."
Another of the projects Simpson was involved with was The Full English which is actually a searchable archive of traditional English folk music put together by the English Folk Dance & Song Society and spearheaded by fellow Full English member Fay Hield.
The collective, which consisted of an impressive line that was Simpson, Hield, Seth Lakeman. Nancy Kerr, Sam Sweeney, Rob Habron and Ben Nicholls, was put together to bring forgotten and traditional songs to life through some of the best contemporary musicians.
Among other things Simpson is also working on the farewell tour for The Full English which he admits has run its course.

"That took off like a rocket. It was so good just in terms of the way it worked. I absolutely loved it and we all had a fabulous time with it, but I think it's time to give it a rest."
The Full English won Best Group at the Radio2 Folk Awards 2014 and some thought this was a controversial decision because it wasn't a group in the traditional sense, so did Simpson think this was the right decision?
"I think it was a very successful collection of musicians and that’s one of the most successful folk records of recent years, The full English.
"It did incredibly well and as a group it was very very successful musically and in terms of a mix of characters.
"Whether it was right or not, I am not sure it’s for me to say. I was very pleased, I have to say, and I think since then that group has gone on to be better and better. I think if we did stay together it would get better and better because every time we played together it was incendiary.
"We have put together some new material for these last gigs which is beautiful, really good and really interesting.
"I don't think there will be a farewell album. We will just go out and do some gigs for fun and wave goodbye."
If the success of The Full English can be used as an indicator of the folk scene in Britain how does he view the state of the music at the moment?
"I think it’s healthier than it’s ever been right now, and it’s very interesting that at a time when the music industry is almost on its knees, in some people’s opinion, that record sales have massively changed.
"People who used to sell 200,000 copies in the first week are selling 15,000 or something like that. It’s just a very different world in the mainstream music market, but I actually think the folk scene is the healthiest it has ever been.
"The standard of musicianship in the British folk scene is extraordinary."
Simpson is now very much an integral part of that scene but there were 15 years where he was the other side of the pond how was he lured to the USA?
"I did it because I could, to start with, because I was in a relationship which meant I could go there.
"American music has always been enormously important to me. I don’t subscribe to this belief that you can only sings songs about where you come from.
"I think you are the sum of all the music that you hear, I think that’s massively important.
"When I grew up I was listening to Gilbert & Sullivan who had an affect on me, but I was also listening to blues and jazz and all sorts of stuff.
"I would listen to Paul Robeson who was an enormously important world traveller in music. Those are the kind of people I am moved by, people who really have soul in what they do.
So were we, here back in Blighty, in danger of losing him to the colonies?
"It never occurred to me to for a long time to be honest. When I got there I didn’t feel much like going back to England because every step I took I found something new and exciting but there were times when I looked at the way US society worked and didn’t want to be there at all."
Did he feel he gained much from his time in the US?
"It really increased the depth of my understanding of American music to play with the people I played with and to listen to the people I listened to. It changed my view of how instruments work, and how rhythms work and I got to listen to and take part in some great music. It filled me up."
Was it something akin to a Robert Johnson type of experience?
"It only took him about six months though," he laughs. "But that story’s great, I love that story about going away and working his arse off.
"I think that’s what we do throughout our lives if we are serious. I do work hard at my music in every way and I work hard at my writing, playing, singing and every aspect of it so to get the opportunity to play with great musicians in America was fantastic.
"Now I am back here I get the chance to play with great musicians here who are some of the very best folk musicians in the world so it’s wonderful."
What was the catalyst which brought him back home?
"It was time to come home. It was one of those things that was massively complicated, there were a lot of elements involved in it but ultimately it was time to come home."
Simpson has been playing for more than half of his life, he has at least 20 albums to his name and has probably been involved in the same amount again. He has won numerous awards and holds the record for the number of nominations at the Radio2 Folk Awards.
The list of fellow musicians he has worked with is like a Who's Who? of folk music and he even finds time to run workshops for fellow musicians and wanabees so does he have many goals as yet unfulfilled?
"I have endless ambitions but apart from anything else I want to keep getting better. I just want to keep feeling like I am understanding what I am supposed to do and expressing it better. I am constantly learning.
"There is so much to learn from playing with people who are good."

Martin Simpson is appearing at The Met Studio, Stafford Gatehouse Theatre on Monday February 2. Tickets are £15 and the show starts 8pm.
Then on Thursday February 26 he is playing Huntingdon Hall, Crowngate, Worcester. Tel: 01905 611427. Tickets are again £15 and the show starts 8pm.
On Friday May 15 he will be playing Tower Of Song, 107 Pershore Rd South, Kings Norton
Birmingham although there is no information on the venue's website.