Threepenny Bit have been around less than five years, they started out as a three piece band, hence the name, but already they are on their third album. 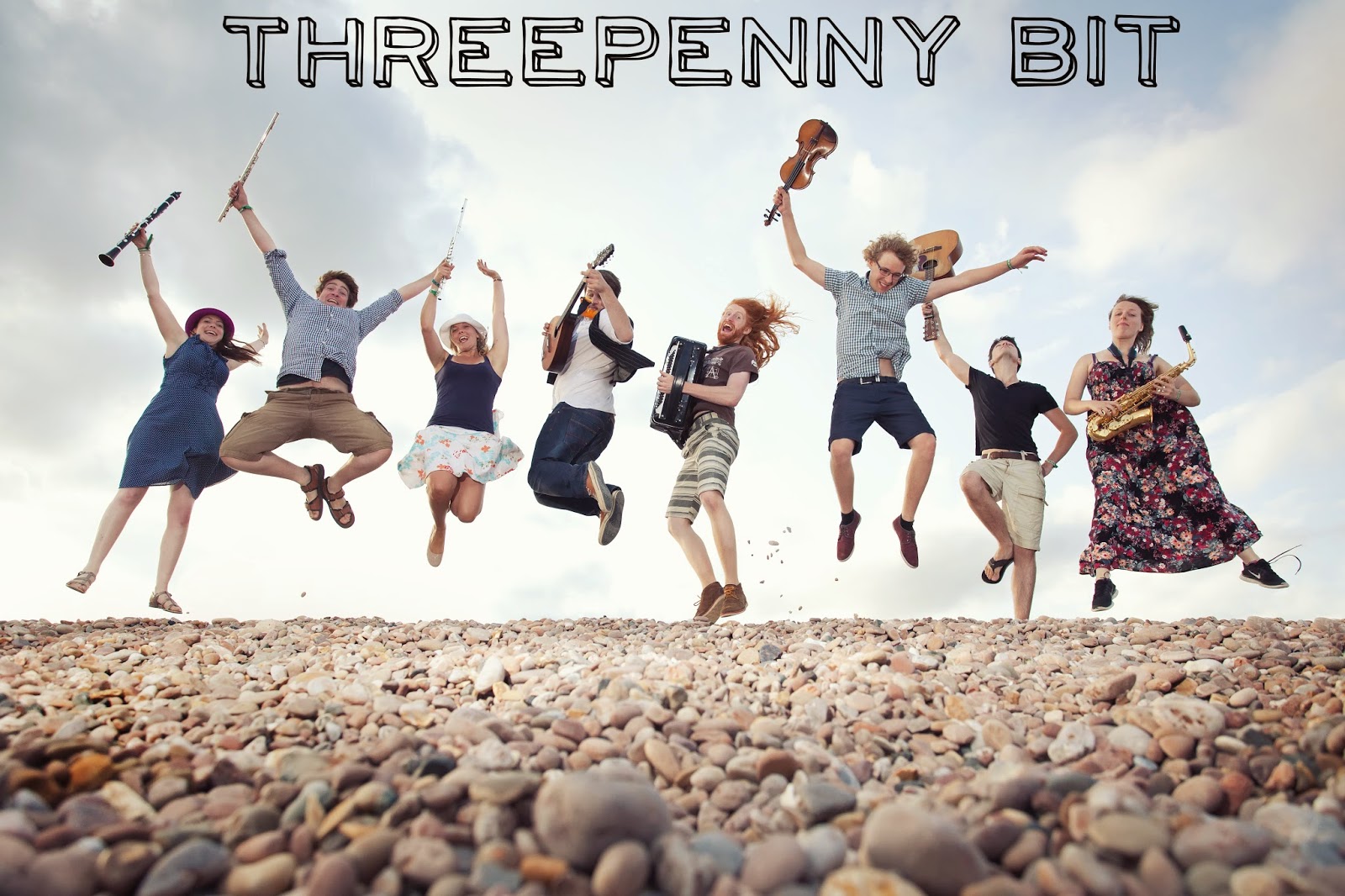 The now eight piece band is based around Hampshire but has been known to venture as far north as Oxford.
With nearly all of the band coming from south of Watford gap, except Moore who is the only true Northerner, Jason Beaumont, Ruth Burrows, Helen Gentile, Hannah Grey, Guy Moore, Chris Nichols, Josh Robson and Steven Troughton make up what seems to be a growing number of folkestras, that's folk bands who are mini-orchestras.
They join the list along with Bellowhead, The Old Dance School, Moulettes and The Full English who admittedly are more of a collective. On this album, which has been produced by Jim Harding and Neil Kennedy, Threepenny have brought together a collection of traditional tunes with a few of their own compositions thrown in for good measure.
The album artwork could have been designed by Terry Gilliam but it wasn't, it was Richard Manders but it does give a clue to the slightly offbeat, eclectic and fun sounds you can find on the album.
Pantomime is fairly light entertainment, which isn't a criticism in any way, and opens with Arthur Muse's, and for the pedants among you the seemingly abhorrent apostrophe is there because the tune is actually Arthur Muse's Jig. It also incorporates Marie's Jig and right from the off uses pretty much every instrument at the band's disposal to produce the light-hearted mainly accordion-led, Morris dance-style tune.
The Rochdale Coconut Dance has a more European feel to it before opening out to an almost middle eastern style beat thanks to Troughton's arrangement.
It is another light-hearted tune that wouldn't be out of place in a classic BBC radio drama and apparently it's inspired by real coconut dancers who can be seen on the streets of Bacup, Lancashire. So if you want to get a feel for men with blacked-up faces, wearing tea towels, coconut shells and looking like Smurfs on acid then you could do worse than listen to this track.
Beaumont's arrangement of Go To Berwick Johnnie has a definite renaissance undertone which gives way to a much more traditional sounding and boot-stomping hornpipe. The track starts off fairly quick and jaunty and never lets up actually raising the tempo for the hornpipe before mellowing out with the gentle strafing of Nichols on the violin and then heading towards the big finish.
This is followed by another of Beaumont's arrangements which opens with a much more urban sound using accordion, woodwind and flute.
The Unfortunate Cup of Tea has a Beethoven-style interlude before giving way to a full-blown and full sounding Irish jig.
By now if you are not dancing around or at the very least tapping your feet rather boisterously then you are either too old or too uptight to be listening to this album.
Popcorn is three tunes rolled into one and is a throwback to the band's days of busking around Hampshire. This is a tune which clearly demonstrates the band enjoying themselves and to a certain degree showing off.
It does have more of a pop/rock feel to it than any of the previous tracks but there are enough interludes of traditional instruments such as Gray on the flute to keep the folk fans from using their clogs to smash their iPods.
Clarinet player Gentile is mostly responsible for the fast-paced Cabbage which does have a rock beat underneath so will be pushing traditional folkies' tolerance to the limit, and for all you Dan Brown fans there is even a little cryptology although don't expect to find the Holy Grail, after all it is just a tune.
The Travelling Lemon is a melodramatic arrangement by Nichols with bold strings and definite throbbing beat keeping it banging along. In parts it's very reminiscent of the South Bank Show theme and if they ever decided to bring it back and update it, they could do worse than use this offering from the band.
It is a pretty complex arrangement which still manages to keep the feet tapping theme going and it is perfectly executed with every strand coming together to make a really full-bodied piece of music.
Mirror Waltz is a slow piece from Beaumont which is OK but it does have that feel of a student recital and never seems to really flow. The gentle flute, pizzicato strings and underlying accordion seem to grate on each other slightly and never seem to flow as a whole. At times you are almost expecting a music teacher to stop and give them directions.
The opening to the longest track on the album Bitterne Distress is a real attention grabber with its rasping strings and reggae undertone.
The band keep the thumping rhythm going and throw wonderful strands of colour from Gray's flute, Nichols' viola and Troughton's accordion. Bitterne is hands down the best track on the album which has everything in there and if you listen really carefully you can even hear the kitchen sink being played, well almost.
The final track Speed the Plough is in some form more than 200 years old, so it's fair to say it needed some updating and Troughton has taken it to task.
The pizzicato opening is the aria from Bizet's Carmen which slips into more traditional flute playing and slick guitar picking which is then overlaid with a funkier drum and bass beat and even mixed in a little jazz sax.
Threepenny Bit's album is a great bit of fun, it's full of wonderful sounds by a band which clearly enjoys doing what it does and delivers exactly what it says on the tin a pantomime fired at full pelt.

Pantomime Cannon is out now and available from the band's website.