The Glee Club, Birmingham has an impressive line up of folk musicians over the coming months including the recently formed New Mendicants made up of Norman Blake and Joe Pernice who have both got a long pedigree with other bands such as Teenage Fanclub, BMX Bandits and Scud Mountain Boys. The duo will be playing the Second City venue on Friday, July 12.
Glaswegian Blake and Pernice, from Massachusetts teamed up in a Toronto tavern and will not only be bringing new sounds to their UK tour but both will be dipping into their impressive back catalogue and expect a new album in the not too distant future. Doors at the Glee Club open 8pm, tickets are £9 and you must be over 16 to attend. For more information call the box office on 0871 472 0400.


PATTY GRIFFIN
Later in July Patty Griffin will be bringing her UK tour to the Glee Club Birmingham on the back of her new album. Griffin was last in Brum at the Symphony Hall as part of Band of Joy and will be playing the considerably smaller Glee on Wednesday July 24. Her album American Kid is due for release on May 7 through New West Records.
Singer/songwriter Griffin says, American Kid "was written to honour my father".
Doors at the Glee open at 7pm, tickets are £20 in advance and for more information contact the box office on 0871 472 0400 or visit  www.glee.co.uk/birmingham


SIMONE FELICE
On Friday July 5 Celebrated American songwriter, author and poet  Simone Felice is coming to the Glee Club Birmingham..
Simone Felice is a celebrated songwriter, author, and poet. A native New Yorker his musical success began with his band The Felice Brothers, originally he and his two brothers Ian and James, growing to a 5-piece. Their albums Tonight at the Arizona, The Felice Brothers, and Yonder is the Clock received international praise.
Felice released an EP, New York Times, and a self-titled album in 2012. Now fresh from his sold-out Barbican show and European tour with Conor Oberst and following his Autumn 2012 sold out Union Chapel concert, he returns to the UK and Ireland to preview new songs.
Doors open 8pm, tickets are £14 and you must be over 18.

THE JAMES RILEY BAND
The refreshing sound of The James Riley Band has been captured on a new EP which will be released on April 28 and with a string of festivals already under their belt they will be starting a tour at the end of this month. For more information check out their site or click the links below to hear more from them.
Lay Me Down (Official Video)
Lay Me Down EP (SoundCloud)


PAPER AEROPLANES
Flying into the Glee in Birmingham on Sunday May 19 are Paper Aeroplanes who will be at full strength for most of their upcoming UK tour. The four piece band's second full album will be released on May 13. Before that they head over to Germany for a month of touring. Little letters, which is the title track from the new album  is out now and has received some welcome attention in all the right places.


THE HUT PEOPLE
Two of the most original musicians on the folk circuit are heading down to the Midlands. The Hut People namely Sam Pirt and Gary Hammond will be at Bewdley Spring Fair on may 6 and then The Donkey, Leicester on May 9 and they are appearing at the cosy venue of Kitchen Garden Cafe, Birmingham on July 2  0121 443 4725.  Apart from appearing for the first time at this year's Glastonbury Festival they will also be playing the Warwick Folk Festival on July 27 and 28. If you have never seen these pair before stomping and banging out their particular blend of folk and world music then make a point of doing so and you will be in a rare treat. 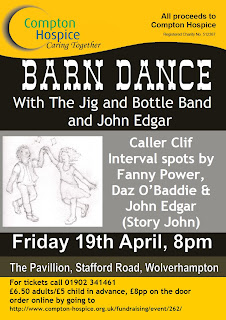 Another duo are making an appearance in Wolverhampton in the upstairs room of the Newhampton Inn.
Dansmall which is in fact singer and guitarist Dan Plews and fiddler Guy Fletcher who have been together for close on 20 years. The duo will be supported by Nick Greenwood and tickets are £8 in advance or £9 on the night. The venue is in the upper room of the Newhampton Inn, Riches Street, Wolverhampton.
The folk club will also play host to James Hickman and Dan Cassidy on May 4.
If you can't wait that long to do some toe tapping then this Friday (April 19) a barn dance with the Jig & Bottle Band and John Edgar, is being held at The Pavilion just off the A449 Stafford road, the dance is in aid of the local Compton Hospice.

LADY MAISERY
If you really want to hear traditional folk music in all its unadorned glory then you will love Lady Maisery. In May not only will they be starting a tour but they will also be releasing a new album Mayday. Pretty fresh to the folk circuit as a trio Hannah James, Hazel Askew and Rowan Rheingans provide some inspired folk singing and incredible instrumentals and will even throw in a little clog dancing if you are lucky. On May 19 they play The Poppy Folk Club, Nottingham and on May 24 they are at the Fold Cafe, Bransford, Worcs this is followed up by The Unicorn, Abingdon, Oxfordshire on May 30.