As you would expect from a musician who is passionately behind preserving local and small folk venues, John Richards launched his latest CD in the upstairs of a local pub which does its best to keep a folk club going.

John, originally from Coseley in the West Midlands, has a music pedigree which many would be proud to lay claim to.
His songs have been picked up by legends such as Fairport Convention and his past successes have been many in bands such as Maurice and the Minors and Desperate Men .
The John Richards Band, which is very much from the Midlands, was formed in 2004 and has now released The Lifeboat which is essentially an EP with bonus tracks but this doesn't detract from the fact it is very much created in the fine tradition of folk music, carrying radical messages and reflecting real lives.
Many of the songs are drawn from John's experiences and battles with life and institutions and carry on that great tradition of using song to give warnings and point out the unfairness of society.
It's title and opening track was inspired by one of his many run ins with the banks who are those wonderful institutions which lend you an umbrella when it's sunny and ask for it back when it's raining.
Don't let this gentle track which has a Ralph McTell feel to it fool you, it has cutting lyrics which using John's doleful voice sets the right tone for someone who is weary of having to battle the bankers just to follow his dreams.
"When did they tell you, that you could go gambling with so many good people's lives? How can it be you're the only ones never to lose?" are words many of us can relate to.
With so many of his songs, John speaks softly and carries a big guitar and if you have been part of the big pension rip off, then the jaunty No More Milk & Honey will quite literally strike a chord with you. This features the solid banjo playing of former Maurice partner Chris Drinan.
John's daughter Emma, who is now a regular member of the band, although she has been singing with her dad from an early age, comes into her own with Fool In Love. She is accompanied by former band member, fiddle player Julia Disney. Emma doesn't have the strongest of voices but it does fit in perfectly with the mellowness which is such a feature of the band.
A more Celtic feel is brought in with a trilogy Hanging Out To Dry/Encantadora/Gassed & Gone which gives Chris a chance to show more of his repertoire this time on the flute. His light tones producing a toe-tapping run of tunes.
The last of the newly recorded tracks This Home's Got A Heart is almost a signature tune for the band. The tune and harmonies perfectly capture the feeling of being on the move and longing to get back where you feel you belong.
Emma really gets to spread her vocal wings on The Smuggler's Song which has a gutsier beat and is woven with eastern sounding undertones. 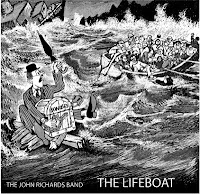 Foundryman's Daughter, which is pretty much John on his own, is about how people can be isolated by prejudice in all its many forms. It features the gentle backing of guest Allie Fellows on piano.
She also features on the accordion with Chris' fine flute playing opening another trilogy of Celtic inspired music which gently washes over you until you find yourself almost unable to stop your feet or your fingers from tapping along.
The bonus tracks finish with Missing, opening with the haunting sound of Allie on the piano leading into Emma's gentle vocals.
This album is a fine example of local talent keeping the tradition of folk music very much alive and if nothing else this CD shows the Midlands is capable of producing not just fine musicians but impressive songwriting too. The Lifeboat, £7, can be bought on the band's website along with their other albums.
Posted by Folkall at 21:20:00