Charlie Harrigan has been around since the early 1970s and recorded his first solo album in the seventh year of that decade. If he is not familiar to you then you could be forgiven as this new album is, to put it mildly, a comeback.

Between 1998 and 2015 Scot Harrigan led "a quite life and discovered boats" and it would be easy to claim the call of the gig and the mic finally brought him back on the music scene, but not as much as surviving a quadruple heart bypass.
"I promised myself that if I got well I was going back to making music... ," says Harrigan, and this album is it.
He opens what is a pretty raw album with I Hope That I Don't Fall In Love With You. It has the feel of just a man sitting down in a club and singing. So much so the album feels like it's hardly been produced at all.
The singing and playing on the ballad is fairly basic and feels like he is just sitting around playing for friends or trying out new tracks. However, there is an honesty and down-to-earthness about the way he sings and plays.
The Glow of the Kerosene Light has an almost amateurish quality to the Wince Coles ballad but the images Harrigan conjures with his words are all the more evocative for that.
With The Lady Came From Baltimore there is that quality you associate with the sounds of Dylan's early offerings. Harrigan doesn't have the most powerful or indeed a particularly lyrical voice but he does make the most of what he has and doesn't pretend to be anything else.
He follows this with John Denver's Whiskey Basin Blues and it's almost a cliche of a country song you are never too sure whether you are supposed to take this track too seriously.
Sporting Life Blues is the first of Harrigan's own arrangements and as a blues singer he seems more comfortable, the clipped verses he uses in this track fit his style of singing more easily. 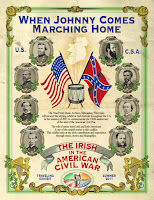 His arrangement of the American Civil War song When Johnny Comes Marching, using this time to the alternative words of Johnny I Hardly Knew ye, will be familiar territory to most people. Harrigan's unadorned approach is again very effective his straightforward strumming and voice is all that's required.
He does a similar arrangement to The Poachers using the tune of Bantry Bay. It's delivered with more confidence and certainly more gusto than the previous track.
Lyle Lovett's If I Had a Boat comes in with a soundtrack of radio channels which really goes on too long and it's not clear why it's there anyway. Harrigan is having some fun with this track and it's certainly enjoyable to listen to the simple ballad.
Harrigan's guitar playing becomes more thoughtful for Writing On The Wall and his Scottish accent comes through more strongly than on previous tracks, perhaps because it's a story of the decline of shipbuilding in the North and people being thrown on the scrapheap.
Shiver Me Timbers sees Harrigan go back to his country persona where the song seems as though it's a parody of C&W songs but you are never sure whether this is the case.
This is followed by Sea of Heartbreak where Harrigan feels as if he is pushing the limits of his vocal range and unfortunately, on occasion, does have the feel of the pub singer about it. His penultimate song Waiting For A Train is another country song where his yodeling insert goes a little astray and comes across as half-hearted.
Harrigan ends the album with My Old Gibson Guitar which like most of the tracks is a simple folk ballad performed quite well and will more than likely sound exactly the same when performed live, which according to the artist was the point of the album.
When it comes to guitar playing Harrigan is no Martin Simpson and his singing isn't in the same strata as someone such as Dick Gaughan but he uses the talent he has as well as either of them, and his basic, no frills approach is really what grass roots folk music is all about. What's more, anyone who is out of the fray for 17 years and then comes back after massive and major heart surgery, take a close look at the album artwork, deserves to be listened to.

Wasted and Wounded is available to buy from the artist's website, online, for downloads and through Highlander Distribution.
Posted by Folkall at 19:24:00