This is not an album for the lily-livered, it's a full on, full-bodied get in the ring and play until the last one is standing collection of tunes.

Tom Kitching's playing is hearty, precise, gritty and at times almost contradictory in its subtlety, and anyone who thinks English traditional music is festooned under a sea of cobwebs need only listen to Interloper once and it will soon clear the sinuses.
Kitching may have been around on the music scene less than a decade but if you have bought an album in that time with fiddle playing on it, there's a good chance it's courtesy of the arm of Kitching.
He deserves his place among the other notable fiddle players these British isles have produced, names such as Seth Lakeman, Dave Swarbrick, Sam Sweeney, Kristan Harvey, Aly Bain and Tom McConville to proffer but a few.
Without even listening to this album just by the titles of songs such as Rufty Tufty, Cobbler's Hornpipe, Gall Bladder Mazurka and Cheshire Rounds you know this is a folk album.
When it comes to an opening track it's always a good idea to fish-hook the listener's ear with something good and Kitching nails it with the aforementioned Rufty Tufty.
For the first part, the track skips along at a fair old pace before becoming more languid for the second part and all through Kitching's precision bowing is intertwined with Freya Rae's flute playing. La Rotta has a funkier opening before Kitching comes screeching in like a diving hawk with a style that is reminiscent of Swarbrick's, this again is in two parts with the second having more of a highland swirl to it.
By the time you get to the third track, which is the Slow Jigs you kind of get a handle on where Kitching is coming from because although the tunes are very traditional they do have a sharper, modern feel to them, a bit like a customised classic car where you can still see the body of the traditional vehicle but it now has a mirror-like paint job, gleaming chrome and finely tuned engine. 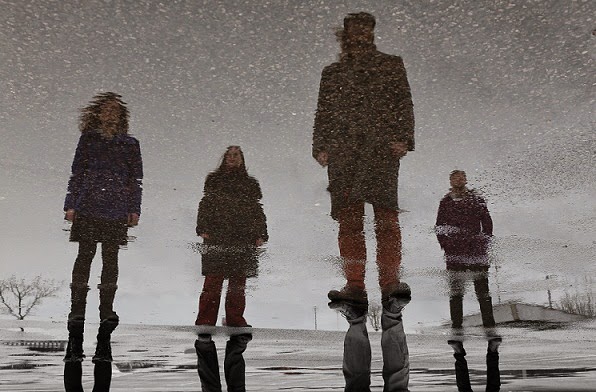 This is followed by Buffoon a traditional Morris dance which has been given a slight hoe down makeover and where Kitching incorporates almost a reggae beat underneath his fiddle and the flute of Rae.
Cobbler's Hornpipe doesn't have the feel of the archetypal style of tune most people associate with a jolly Jack Tar, billowing sails and ropes on the quayside, although it flows up and down from the quick opening to the much slower cello and shaker performed by Lisa Watchorn and Jim Molyneux respectively. It shows Kitching is not into short changing people when it comes to content. The tune has a full and multi-layered sound and is one of those you could listen to over and over each time discovering something different.
Tim Elvin's hornpipes B-Shaw, Be Happy/3 Puds are given a jazz feel through Kitching's growling, almost threatening fiddle playing and Rae's complementary flute. The foot stomper of the album is Fair Play/Bishop of Chester's Jig with its almost medieval drumbeat underneath the bluegrass sound of Kitching's strings. Kitching has put a solo interlude almost as a bridge between the two parts where his playing has the feel of the rooster strutting around the yard.
In complete contrast there is the almost New Orleans, lazy style opening of Gall Bladder Mazurka/The Lady Murray's Delight. The first part could almost be the theme tune to one of the darker crime thrillers which are so popular on TV at the moment. Marit Falt gets her solo in on the latmandola and gives the tune that eastern European feel. The second part is a much lighter and lilting sound with the growl removed from Kitching's fiddle playing.
Cheshire Round/Childgrove starts with a 3:2 hornpipe which, thanks to musicians such as Kitching and fellow fiddle master Sam Sweeney, seems to be seeing something of a re-emergence on the folk scene. The tune slows down into the plaintive sound of Rae, this time on the clarinet, mixed with the almost macabre sound of Kitching's strings which towards the end do lift the tune out of the low and eerie mist of sound and it grinds into a slight madness at the end with Jon Loomes' hurdy gurdy and the screech of tired hinges. The last track is Sue and Adi's Fast Dance written by Kitching's mentor, Sean Heeley, and is clearly heavily influenced by Heeley's time in Eastern Europe. There is almost a Cossack feel to the tempo and you can see the swirling and ornately embroidered costumes of the dancers swirling as the tune builds to its crescendo.  If you are going to take on a project then it might as well be something you can get your teeth into like trying to capture the state of English folk music and to put the cherry on the top try also to define the role of the fiddle. It sounds like deep stuff.
On the lighter side it's an album filled with fiddle playing that is precise, meaty and shows just how much you can get out of some slivers of wood, four strings and a horse's tail when you have the talent to make it sing.

Interloper is released March 2 on the Fellside label.